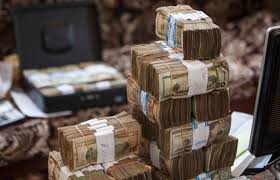 Former Finance Minister Felix Mutati says it is not true that Zambia is losing about US$4.5 billion in illicit flows every year.
Mr. Mutati says Zambians must try to give correct information about the country whenever they have a platform and that it is regrettable that certain information on taxation was being reported inaccurately.
Mr. Mutati says the statement that Zambia is losing colossal amounts through illicit financial flows and unbalanced tax obligations by multinationals with offices in Zambia as observed at the conference was incorrect.
“The incentive under Zambia Development Agency Act from the 1st of January 2017 was quashed the 2017 budget so that is not correct so we need to put the record correct. It’s not true that we lose $4.5 billion in illicit flows every year. Our total GDP is about $6.5 billion so arithmetically it’s impossible to get $4.5 billion out of $6 billion. We have our own challenges yes but they should not be exaggerated. Third, is double taxation that was raised,” said Mr. Mutati.
“Significant investment in our country is by foreign companies in Zambia rather than Zambian companies investing abroad. So we tax them in Zambia and collect the taxes in Zambia and hence the benefit is greater for Zambia compared to Zambian companies that may have invested abroad. Figuratively put, it’s like in a game of chess where you sacrifice a pawn and gain a queen.”
Tomorrow, the former Finance Minister will open the discussion on ‘National and International Administrative Cooperation’ and later wrap up at closure with ‘Increasing Domestic Revenue Mobilization and stemming’ with focus on EU and AU cooperation.
Mr. Mutati has held various ministerial portfolios which include Energy, Commerce, Finance and Works and Supply and he is the ACCA Global Advocate.