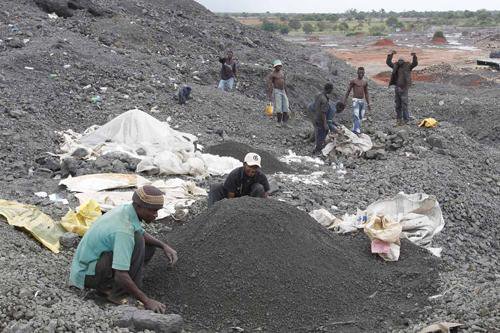 • President Hichilema must relook into the Black Mountain empowerment scheme.
• The slug dump initiative appears to be biased because only few youths and Women in Mining have been considered.
• The Republican President must sit down with the Associations and ask for suggestions on how best this empowerment can be done.

Emerald and Semi-Precious Stones Mining Association of Zambia has called on President Hakainde Hichilema to relook into the Black Mountain empowerment scheme on the Copperbelt.
Speaking to Money FM News, Association President Victor Kalesha said President Hichilema must engage various Associations and ask for suggestions on how best the empowerment scheme can benefit every person in areas where they are able to get it.
Mr. Kalesha said the Association is aware that the Black Mountain empowerment scheme cannot empower every person who needs to be empowered, but there are various areas of empowerment on the Copperbelt in terms of slug dumps that can be considered for such initiatives.
He noted that slug dump initiative appears to be biased because only few youths and Women in Mining have been considered when every other citizen including gemstone miners need empowerment.
“We would like to appeal earnestly to the Republican President to relook into the empowerment scheme that is happening on the Copperbelt on the Black Mountain. We want to appeal to him because he is the Head of State and an appointing authority over those that are superintending over the Black Mountain.”
“We are aware that there are various areas of empowerment especially on the Copperbelt in terms of dumps in various districts including Lufwanyama. We would like to appeal to the Republican President that he sits down with the Associations and ask for suggestions on how best this empowerment can be able to trickle down to every other person in the country in areas where they are able to get this empowerment,” Mr. Kalesha said.
And Mr. Kalesha stated that although the Association appreciates that government considered Women in Mining and the Youth as beneficiaries of the empowerment scheme, the economy is not centered on the two groups.
“We have been calling for empowerment as gemstone miners which has not been forth coming. We appreciate that they considered the women in mining and it is a very welcome gesture because they are off the list of those that have been crying for empowerment, we also appreciate the empowerment of the youth, but the economy is not run alongside just these two and the women. So we request the President that he should give us audience that as we sit down with him we will be able to explain other areas of empowerment,” he stated.
In February this year, President Hakainde Hichilema handed over part of the black mountain to cooperatives owned by Zambian youth and women who have been granted licenses to operate.