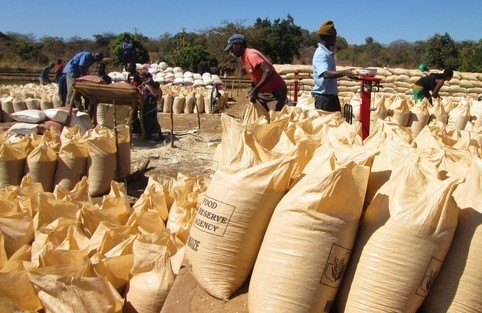 Food Reserve Agency (FRA) has announced that it will buy a 50 kilogram bag of white maize at K160 during the 2022 Crop marketing season.
Speaking at a media briefing in Lusaka, FRA Board Chairperson Kelvin Hambwezya further revealed that the Agency will buy a 50 kilogram bag of soya beans at K550 which translates K11 per kilogram, while paddy rice will be bought at K200 per 40 kilogram bag.
Mr. Hambwezya stated that this decision was arrived at after FRA’s crop price scenario analysis and consultations with stakeholders.
“Food Reserve Agency will enter the market with a cost reflective price as this will provide market access to small scale farmers in outlying areas that are difficult to reach by the private sector as per mandate of the FRA act number 6 of 2020 which will in turn , reduce wastage of the harvest in particular areas ,” he said .
Mr. Hambwezya noted that the prices announced are not floor prices but rather FRA prices under the principle of willing seller and willing buyer.
“Funds for farmer payment on first come first served basis will be made available. The Agency will disburse the funds to various district financial institutions in readiness for payment to farmers who deliver the crop to depots,“ he said.
Meanwhile, Mr. Hambwezya disclosed that the Agency intends to purchase at least 170,000 metric tons of white maize, 1, 500 metric tons of soya beans and 1,000 metric tons of Paddy rice during the 2022/2023 marketing season.
“During the 2021/2022 agricultural and farming season, the country recorded a total production of 2,706,243 metric tonnes of maize, a drop by 25.24% from the previous season. There was a further drop by 5% in paddy rice production but a 16% marginal increase in the soybeans production, “he stated.
Mr Hambwezya added that the agency shall operate 600 satellite depots in all districts in the country and farmers shall be paid through designated Banks upon presentation of appropriate documentation.
He said the expectation of the agency to sustain the admirable achievement of good service to the farmers and maintain stock losses at below 1%.

Mr. Hambwezya further urged farmers to adhere to the general practice of ensuring that they clean the maize at their farmsteads to avoid congestion at the FRA depots.

Ease the process of business registeration.