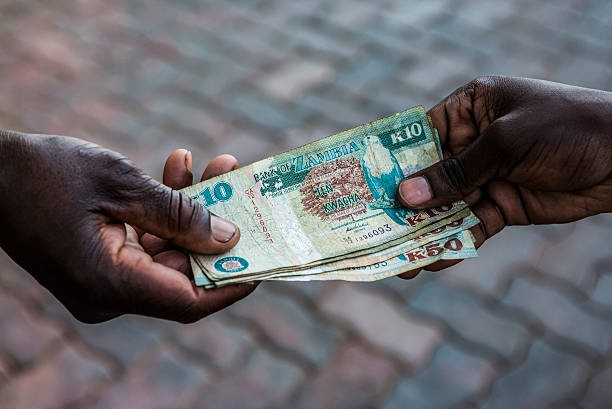 • The strong Kwacha performance could be attributed to reduced demand for the dollar on the international market.
• Positive sentiments regarding the IMF bailout package are also contributing the positive performance.
• This is raising confidence in the economy and giving hope to investors that the country will get back on the economic recovery path.

The Zambian Kwacha has continued to show some resilience against major global convertible currencies such as the United States dollar.
The Kwacha closed the previous week on a positive note against the U.S dollar at K16.81 and K17.14 and has opened the week trading at K16.83 and K17.16 ngwee respectively.
The positive movement in the local unit is mainly on account of reduced demand for the United States dollars on the international market among other factors.
According to an Economist, there is low demand for the Green back because Russia recently requested countries that import its oil to be paying in its currency, the Rouble.
Emmanuel Zulu told Money FM News in an interview that this has reduced demand for US dollars as all the countries especially India that are getting oil from Russia, are now paying in the Rouble.
Mr. Zulu noted that as a result, the dollar is going down in terms of demand and this has also reduced the strength with other convertible currencies.
“On the performance of the kwacha, we note some resilience against major convertibles such as the US dollar. The strong performance which has seen the Kwacha trading around K16.08 to K17.03 could be attributed to reduced demand for the dollar on the international market as Russia recently requested for its oil to be paid in Rouble, countries especially India are getting oil from Russia, they are now actually paying in the Rouble.”
“This has seen that the dollar is actually going down in terms of demand and that has also reduced the strength with other convertible currencies,” Mr. Zulu noted.
Mr. Zulu further noted that the other factor contributing to the strong performance of the Kwacha is the positive sentiments regarding International Monetary Fund (IMF) bailout package, which is raising confidence in the economy and giving hope to investors that the country will get back on the economic recovery path.
He said the Kwacha’s appreciation trend may continue for as long as the country is moving towards attaining bailout package.
“Zambia seems very close to getting the IMF package which is raising a lot of confidence in the economy and also giving hope to investors that the country will actually get back on the economic recovery path, so that is the more reason you are seeing the Kwacha getting resilient. So it’s mainly sentimental and this may continue for as long as we are in this process of getting the IMF bailout with positive signs.”
“Unless the IMF bailout tends to show some kind of maybe flimsy signs that may affect the performance of the Kwacha, but as we are moving towards this bailout with all signs pointing to the fact that Zambia may attain this, the Kwacha will remain resilient.
Government is confident that Zambia will get an IMF supported program this year and place the country’s debt on a sustainable trajectory once again.
In December last year, Government reached a Staff Level Agreement with the IMF and its anticipation was for the IMF supported program to be agreed by June 2022 but the expectation has now shifted to September this year.
On Thursday last week, Government presented the country’s official creditors with a plan for getting its debt under control, requesting assurances of help from them in order to unlock an IMF bailout package worth US$1.4 billion.

LCC to empower youths with businesses