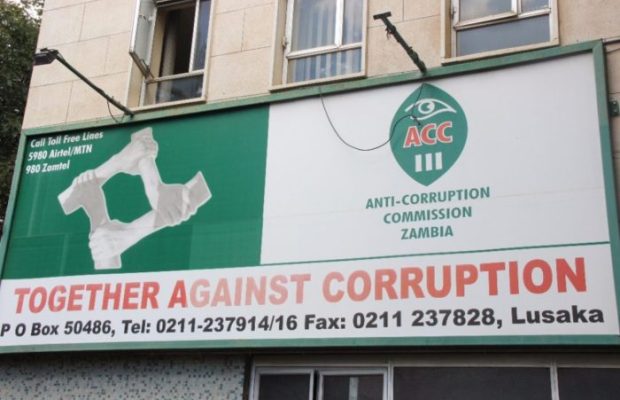 • He gave K10, 000 to a ZRA Customs Officer as inducement for him to facilitate importation into Zambia truckload of second-hand clothes.
• This was intended to avoid payment to ZRA of about K300, 000 duty on the consignment.
• ACC has also arrested two Mtendere residents for attempting to bribe a Reserve Police Officer.

Anti-Corruption Commission (ACC) says it has recorded a warn and caution statement from a clearing agent in Nakonde for Corrupt Practices involving K10, 000.
Commission Public Relations Manager Timothy Moono tells Money FM News in a statement that Emmanuel Silwizya, 30, acting on behalf of Inter-Freight Logistics Ltd, a customs clearing agent gave K10, 000 to a Zambia Revenue Authority (ZRA) Customs Officer as inducement for him to facilitate importation into Zambia, a truckload of second-hand clothes by purporting that the consignment was destined for Congo when in fact not.
He said the incident which happened between 1st August 2022 and 20th August 2022, was intended to avoid payment to the Zambia Revenue Authority of about K300,000 duty on the consignment.
Meanwhile, Mr. Moono revealed that the Commission has arrested two residents of Lusaka’s Mtendere Compound for attempting to bribe a Reserve Police Officer in order for him to facilitate the release of two illegal immigrants from Police custody.
“George Kalonga, 62 of B5 in Mtendere and Evans Nyondiko, a Burundian national of BI, in Mtendere have been arrested and charged with one count of corrupt practices by private persons contrary to Section 19(2) of the Anti-Corruption Act No. 3 of 2012.”
“Details are that between 22nd July 2022 and 22nd August 2022 in Lusaka, Kalonga and Nyondiko, as private persons, did offer K2, 000 cash as a bribe to a named Reserve Police Officer in order for him to release two foreigners namely Abraham Kwingula and Stephen Amani, who were detained in police custody for being illegal immigrants,” he said.
He added that Kalonga has been released on Bond while Nyondiko has been detained and the two are expected to appear in Court soon.

CSPR regrets the widening gap between the rich and the poor