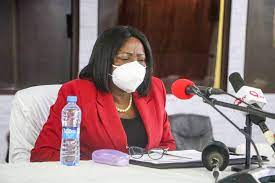 • ZPPA recommended tender cancellation.
• This was done following irregularities that were brought out during a petition in the tendering process.
• The tendering process had used an instrument that could not have allowed participation of foreign countries but Zambians only.

Vice President Mutale Nalumango has assured of transparency in the fertilizer tendering process for the 2022/2023 farming season.
Speaking in Parliament during the Vice President’s question and answer session, Mrs. Nalumango says cancellation of the fertilizer tender by Zambia Public Procurement Authority (ZPPA) was done following irregularities that were brought out during a petition in the tendering process that was recently awarded by Ministry of Agriculture.
She explained that the tendering process had used an instrument that could not have allowed participation of the foreign countries but Zambians only, adding that government is thoroughly investigating the matter and anyone found wanting will face the law.
“It was done on some technicality and it was not the Ministry that really canceled, recommendation for the cancellation came from ZPPA because apparently in the tender, they used an instrument that could not have allowed participation of outsiders, what I mean is other companies that are international or outside Zambia, it provided for Zambians only unless the Zambians could not meet.”
“I think they allowed it open and that is what the ZPPA noticed and recommended that this tender cannot go on. The instrument used was not the right instrument to allow that and so the Ministry had to listen and the tender had to be canceled. That is the way it was done, it was not initiated by political thinking. Participation was not according to the instrument used,” Mrs. Nalumango said.
Mrs. Nalumango added that the tendering process will now be selective because of limited time and Zambians will see the transparency.
“There was a petition on the tender award and it is the petition that brought out the irregularities that the ZPPA followed,” she added.
She was responding to leader of opposition in Parliament, Brian Mundubile who wanted to know why Anti-Corruption Commission (ACC) is still quiet on the questionable procurement processes, following the cancellation of the fertilizer tender by ZPPA.
Zambia Public Procurement of Authority (ZPPA) has cancelled the
Fertiliser tender which was recently awarded by the Ministry of Agriculture after the process was flouted.

According to ZPPA Director General Idah Chella, the action was taken in line with regulation 249, following a realization that the procuring entity, the Ministry of Agriculture, decided to include local bidders or suppliers on a bid that was restricted to citizen bidders without seeking a deviation from ZPPA.

Meanwhile, Mrs. Nalumango disclosed that Zesco Limited has so far connected 40, 000 households to the national electricity grid out of the backlog of 62, 000.
She stated that the power utility firm is working to ensure that people are connected and urged all those on the waiting list to remain patient.